*Some links on ventriloquistdummiesforsale.com are Amazon affiliate links, and if you use them to make a purchase, we may earn affiliate commissions (at no extra cost to you). Learn more. 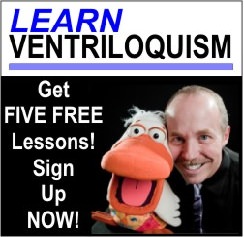 There are a lot of Google searches on how to be a ventriloquist. That is proof that this old art of entertaining people is far from forgotten in modern times.

This article is made to show you how anyone with a little patience can make a profit by learning this skill.

Ventriloquism is a form of entertainment where the artist makes the inanimate object seem to come alive.

To know how to be a ventriloquist, you need to learn how to “throw your voice” or “speak from your stomach”.

But first, let’s learn a bit about this art itself.

Shop For #1 Best Selling Books – How To Learn Ventriloquism!

A short history of ventriloquism

The roots of ventriloquism are as old as ancient Greece. Historical records hold evidence that ventriloquism was also practiced among Inuit, Maori, and Zulu peoples.

Its name comes from the Latin words venter (stomach) and loqui (speak). Its literal translation would be: speaking from the belly, or, as Greek liked to call it: gastromancy.

One of the famous ventriloquists from this time was Pythia, the priestess from the Apollo temple located in Delphi, Greece.

In the Middle Ages, ventriloquism was criticized as a form of witchcraft. Only around the 19th century, it became performance art.

It first became popular through traveling funfairs where ventriloquists started to use dolls in their performances.

The term “how to be a ventriloquist” made its full bloom during the music hall era in UK and the vaudeville era in the United States, in the late 19th century.

The first ventriloquist who was offered a professional engagement in 1886 was Fred Russell. He is considered the father of modern ventriloquism.

The man who took the story even more forward was from the next generation of ventriloquists and his name was Arthur Prince (British).

With his dummy, Sailor Jim, he became one of the highest-paid ventriloquists, standing beside the Americans: The Great Lester and Edgar Bergen.

Edgar Bergen popularized ventriloquism use in comedy and he inspired generations of ventriloquists that followed.

The Hall of fame in ventriloquism is also filled with other famous entertainers like Paul Winchell, Jimmy Nelson, Jeff Dunham, Terry Fator, Paul Zerdin, Dan Horn and many others.

Why you should learn ventriloquism

If you’re reading this article, you’re probably already interested in ventriloquism. But today, the world is in need of ventriloquism artists.

The interest of the public in how to be a ventriloquist isn’t in decline actually, but fewer and fewer people practice this skill.

A pure example of this is Angelique Monet, whose show Multiple Me, where she portrayed several personalities with several dummies, gained huge popularity in Theater Row in Manhattan.

Another example is popular children’s entertainers Zillah & Totte, who won the first season of Sweden’s Got Talent.

With a good idea and the use of modern media, for example, YouTube, one could easily profit from using this skill. Another way would be to share your knowledge about it.

But these are just suggestions. Anyone interested in learning this skill could come up with tons of great ideas.

How To Be a Ventriloquist 2017

Tom Crowl is a comedian, ventriloquist, published author, and author of the first virtual course for learning how to become a ventriloquist, with around 30 years long career in entertainment.

He has been the featured opener for many celebrities and recognized acts like Rodney Atkins, The Marvelettes, and Chubby Checkers.

Events hosted by names like Oxy Permian, Coca-Cola, and Armstrong also feature his name. By the present day, his course “Learn Ventriloquism” is one of the best out there.

Get Best Online Video Course Made By Professional Ventriloquist!

My recommendation for starters and those interested in working with kids is to try entertaining kids in kindergartens or birthday parties and fairs this way.

The amount of positive energy you’ll be getting as feedback is really something, plus you’ll earn money.

If you’re an adventurer, this can finance your travels around the globe and exchange people on the streets of your favorite cities.

If you become really good at it, only the sky is the limit. Just Google some names like Jeff Dunham and other famous ventriloquists.

The reason to do it? It’s fun, it’s easier than a lot of jobs out there, plus it’s highly valuable in terms of energy exchange with the audience.

What do you need to be a great ventriloquist?

A good ventriloquist act involves great skill and plenty of planning. What you’ll need to learn, besides learning how to throw your voice is how to write a script for your act.

You’ll also need some time to practice and a dummy. You’ll need to create a name and a character for your dummy. This is important for writing a script. You’ll discover that once your dummy has a character, ideas will start to flow.

How to Become a Ventriloquist DVD by Paul Winchell

Paul Winchell’s name has its own star on the Hollywood Walk of Fame, for his entertaining work on television.

This man was also medically trained, so his course holds all his knowledge put to use. This course is so must-have if you want to learn ventriloquism. 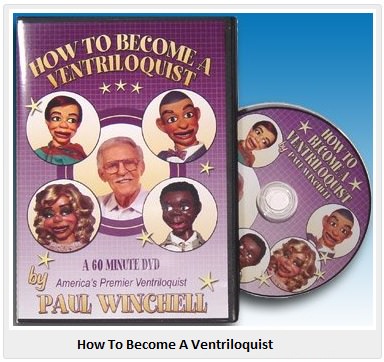 Shop For “How To Become A Ventriloquist – Click Here!

You can have many starting points for your script thinking about whether your character is able to feel human emotions.

What problems does your dummy’s character face? Do you have a relation to your dummy? These are all questions you should ask yourself in search of a great story for your script.

You can also use some existing stories to start, like fables, books, etc., but real life also has tons of inspiring ideas.

In most cases, writing a script is writing a dialogue between you and your dummy, or your dummy and the audience. The more engaged your audience is in the live act, the better.

Humor is proven to work so you may want to start with some hilarious scripts/stories.

How To Become a Ventriloquist?

To know how to learn ventriloquism, you need to learn how to make your voice sound distant, but at the same time to prevent your lips and jaws from moving as you speak.

There are also some non-verbal tricks that one can use to misdirect the public away from oneself and towards other things and therefore make the performance more entertaining.

The author of this course, Bob Rumba, is a first-class ventriloquist that appeared in television shows like Oprah, America’s funniest people, Human Factor, etc.

A special guest in this course is Jay Marshall, a famous magician and also a ventriloquist who shares his unique tips and tricks.

Simply said, you won’t go wrong by choosing how to learn ventriloquism with this course. 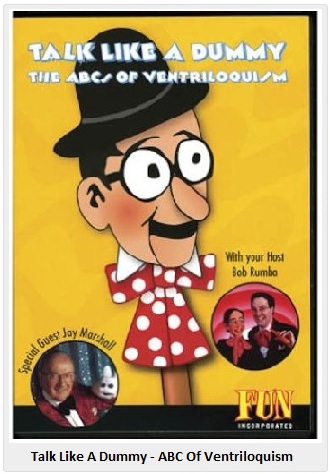 There are a lot of exercises and articles that you can find online and use to learn ventriloquism, but that’s the longer path.

There is a great deal of those that will only take your time and won’t give you anything useful. Incorrect techniques and unskilled people will only hold you back.

Below you can find some of the most worthy tools for learning ventriloquism around.

Famous ventriloquist Edgar Bergen popularized the use of ventriloquism in comedy in the early 20th century.

He and his characters, Charlie McCarthy and Mortimer Snerd were best known for proficiency in ventriloquism.

This manual is great for fine-tuning your ventriloquism skills aka becoming a pro. 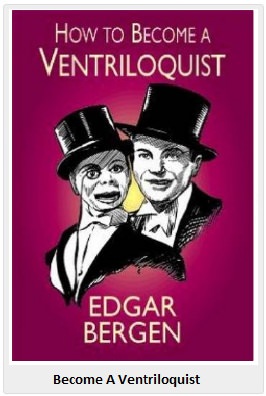 Get “How To Become A Ventriloquist” Book – Click Here!

This is not just a course on how to be a ventriloquist, but this manual holds many other useful tips, for example: how to write scripts, land gigs, get paid etc.

The author of this course is Taylor Mason, a recognized comedian, ventriloquist, and musician. 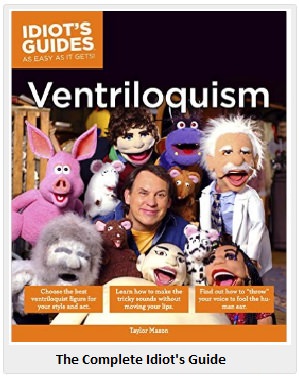 Ventriloquism Made Easy: How to Talk to Your Hand Without Looking Stupid! Second Edition by Paul Stadelman

Paul Stadelman was a magician that turned ventriloquist. Also known as Sandu, with his dummy “Windy Higgins” this man earned a lot of recognition after World War II.

This book is great for starters as everything is nicely explained and written in a funny tone and it also holds 22 comedy dialogs to get you started. 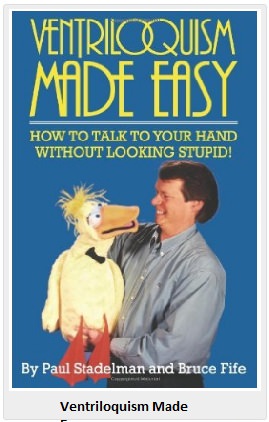 The same man made another great course about scriptwriting. This course consists of 12 videos and several interviews with famous ventriloquists.

They share their ideas, plans, tips, and tricks about writing a script for a ventriloquist act.

As with learning any new skill, ventriloquism will also need some practice. But that’s the funny part – you only need to adopt the rules and you can practice literature anywhere, at any time.

And the best of it – it will be hilarious! So if you really want to know how to be a ventriloquist, you only need to decide it, because you’re looking at all the tools you’ll ever need.